Bowe Machine Co. is looking to expand its downtown location to keep up with its demanding global market, its president Simon Bowe told city council members Tuesday. The 58-year old company, which produces industrial shear blades and car-shredding machines, plans a 32,000-square-foot expansion for its location at 2527 State St.

“We’ve planted a lot of seeds over the last several years, and things are starting to happen,” Bowe said Tuesday before the council meeting. “Since our machines have gotten larger over time, our customer base has spread out geographically.”

The incentive package, in the form of the Bowe Machine Company Tax Increment Financing district, or TIF, will fund up to $437,500 over a five-year period.

Scott Naumann, 2nd ward alderman, described the project as “nothing short of mind blowing. Our support is a testament of how proud we are to have you in Bettendorf.” 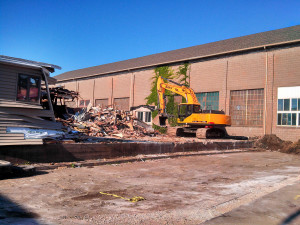 Bowe Machine already has demolished obsolete space to make room for the new development that will house a manufacturing facility and allow the business to operate more efficiently.

The company supplies equipment to companies across the globe and locally to Deere & Co., Kone and Case New Holland.

Currently, Bowe Machine employs 70 people, and the expansion project will add five to 10 more jobs by the time construction is complete in January, Bowe said. Specifically, Bowe said the expansion will bring in machinist and management positions, adding that he’s excited about recently hiring “some great young talent.”

Scott County also has showed support of the development and the TIF district.  “It’s exactly what TIF should be used for,” Scott County Administrator Dee Bruemmer said. “It’s a manufacturing company, and it’s manufacturing jobs in a short period of time.”

The company currently pays $38,808 in property taxes, a number that is projected to increase to $159,913 after the development is complete, according to Scott County documents.

Simon Bowe, company president, said that the TIF will help his company pay for the construction of the building, but his company will spend $3.5 million on the entire project, including almost $2.5 million on new machinery.

“The TIF will give us time to get our building paid for and get us back on our feet before our property tax increases,” Bowe said, adding that the development should also improve the façade of the downtown area.

“We like to think of ourselves as partners with the city,” he said. “We take up a lot of space in the downtown, and this is an opportunity to improve the scenery down here.”